Flooding at the Old Post Office on Bridge Street

October 30, 2015
We've lived in the Old Post Office for a couple of year's now. During that time the cellar has flooded a few times when there has been sudden heavy rainfall over Belper. The old sewage system doesn't cope with the extra rainwater run-off from a heavy storm. This is not surprising given how the town has grown over the past 25 years.

There's a small drain gully just beside the outer cellar door and it is about 2.5 metres below the level of the A6 road outside the property. So I'd say it is about level with the top of the sewage tunnel/pipe built under the road. When the system is overwhelmed by storm water run-off some of that water finds its way back to the cellar drain gully and floods out. There are some stone steps leading down from the garden to the cellar door and in bad conditions I've seen the water gain a depth of at least 60 cms deep. Needless to say this water finds its way into the cellar which is at the same level. The  cellar then floods to a depth of perhaps 10 cm of water. Within an hour or so after the storm surge the water drains away through the brick floor of the cellar leaving a coat of fine mud on the cellar floor and on the path outside the cellar door.

The previous owners were clearly aware of the flooding problem as someone had built up the cellar door sill with two courses of brickwork to try to prevent water flowing in. On the solicitor's enquiry when we bought the place the seller disingenuously claimed there had been no insurance claims for flood damage. This was of course not the same as no flooding. Our surveyor didn't believe them neither did we. However I've lived in houses with cellar flooding problems before so I was not too worried. We just have to keep anything which might be damaged at least 30 cm above the cellar floor. It would have been a lot simpler if they'd  just fixed the flooding problem rather than trying to build bodged brickwork barriers. 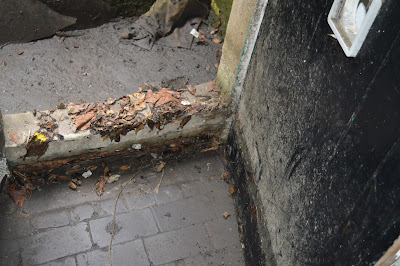 The solution to this was simple. I took some before and after photo's of a flooding incident and sent them by email to the Water Utility Company (Severn Trent Water). I said their sewer was causing problems in our property and could they please fix the problem. I must say Severn Trent acted in good faith and reasonably quickly. They sent a team around to investigate our drains and their sewer. The even ran a video camera through our drain system. Once they'd completed their investigations and agreed with my assessment of the problem a contractor was appointed to install a non-return valve in the drain gully by the cellar door. The actual work only took a couple of hours.

The cost to me for those works was nothing. Severn Trent even refunded a year's sewage rates for our property as compensation for the cellar flooding. Since then we've had no flooding despite some heavy rain.

We had a guest (family) visit during the last weekend. I was outside the house while the guest was using the bathroom. I noticed the downpipe from the bathroom was badly leaking with draining bathwater gushing out against the brickwork of the house. It was obvious that the cast iron pipe had fractured clear through its circumference at about 2.5 metres above the ground and had become slightly displaced allowing water to gush out. Once the water stopped flowing I decided to investigate and got the ladder out to get close to the damage. On closer inspection I was able to ascertain that some mastic coated aluminium tape had come free from the back of the cast iron pipe. This tape had been painted over at least twice in different coloured paint, so the "repairs" were probably at least 15 years old by previous owners of the building. This had now failed.  The pipe is probably of Georgian, or possibly Victorian, vintage.  I measured the external pipe diameter with a caliper and ch
Read more